With it now being sixteen months since the new driving test was introduced on December 4th 2017. Lets take a look at the how the changes are going from the perspective of Nigel Richards Driving School and the driving test in Wrexham.

The main change that we had to coach our pupils to demonstrate that they can follow directions from a sat nav rather than receiving every direction from their driving instructor their lessons or driving examiner on the test.

The main area coaching we needed to offer help was remember in to check mirrors and signal before starting any approach to a junction.

This we found was be cause despite the sat nav telling the pupil which way to turn they were missing the prompt offered by their driving instructor. As an example lets say we were driving down Chester road from Acton towards the roundabout by the Wrexham library car park.

“At the roundabout follow the road ahead taking the second exit”

Whereas the sat nav could easily give instruction such as:

“At the roundabout go straight over”

And this instruction can be given much later by the sat nav than it would be by their instructor or by the driving examiner on the driving test.

This we noticed was sometimes causing pupils to make late decisions in relation to not only mirrors and signal routine but also the late positioning of the car was causing problems.

Our coaching approach encourages pupils to combine good forward planning with frequent glances to the sat nav screen to observe the map. But obviously without distracting from the changing road situations ahead.

Along with the sat nav introduction the time of independent on the test was increased from 10 to 20 minutes. 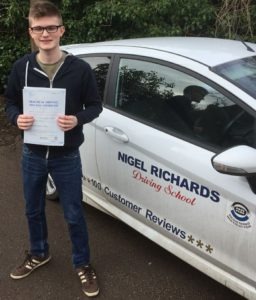 Questions whilst on driving test

Next change was the examiner asking a question to the candidate as they were driving on the test. As previously all the questions had been asked in the Wrexham driving test centre car park before the pupil started the test.

The questions whilst driving can also involve asking pupils to carry out such tasks as:

Finally on the manoeuvres part of the test the “reverse around a corner” and “turn in road exercise were dropped and replaced with more everyday type of manoeuvres such as forward bay parking and moving off from the right hand side of the road.

We at Nigel Richards Driving School have found that our pupils have adapted to the changes well and agree that the changes are creating more independent drivers.

For more details on the changes you can go Here